skip to main | skip to sidebar

Eating books for breakfast, brunch, lunch, dinner, and everything else!

Meg Cabot (born Meggin Patricia Cabot on February 1, 1967 in Bloomington, Indiana, United States) is an American chick-lit author of romantic comedies for teens and adults. She has written under the name Meggin Cabot, as well as the pseudonyms Patricia Cabot and Jenny Carroll. She has written and published over fifty books, and is best known for The Princess Diaries, later made by Walt Disney Pictures into two feature films of the same name. Cabot has more than fifteen million copies of her books — children's, young adult, and adult — in print worldwide. Her website averages about 80,000 unique visitors a month .
The above paragraph was taken from http://en.wikipedia.org/wiki/Meg_Cabot.

For more information on Meg Cabot visit http://en.wikipedia.org/wiki/Meg_Cabot. and/or http://www.megcabot.com/!!!


The Mediator series by Meg Cabot
About the series


(This piece was taken from http://www.megcabot.com/mediator/about.php, and is written by Meg Cabot)

I first got the idea for The Mediator series after my father died in 1994. My brother and I kept thinking we saw him out of the corners of our eyes. I know it was just a trick of our unconscious, but it did seem a little like Dad-who had a good sense of humor, and played a lot of pranks-was haunting us, in a joking way. That got me thinking-what if there WERE such a thing as ghosts? And what if, instead of just the ghost of someone YOU happened to know and love, you were someone who could see EVERYONE's ghost?

When I mentioned this to my brother, he groaned, "You're not going to write a book about this, are you?" I started writing one that day-a book that eventually became SHADOWLAND, the first book in The Mediator series, about a sixteen year old girl who can see and speak to ghosts (only no one in her family knows this) and who moves, with her mother, from Brooklyn to live her new stepfather and brothers in California, where she encounters Jesse, a spirit like no other-and to whom she later proves to be bound by destiny.whether she likes him or not.

And she definitely does.

I chose Carmel as a setting because when my brothers and I were kids, our father taught at the Naval Academy in Monterey, CA, and we lived in Carmel, CA, and went to the Junipero Serra Mission School, just like Susannah Simon, the series. I've never forgotten the beauty of Carmel, or the haunting mystery of the mission, so I based the books there (although all the characters at the Mission School and in the Carmel of the books are fictional).

I originally planned there to be 8 books in the series in all. Simon and Schuster contracted me for 4 books, but the books didn't end up selling at all, and after the publication of DARKEST HOUR, they chose not to buy my proposal for the next four books in the series (in other words-I got fired).

I was devastated. But life goes on. Happily, The Princess Diaries series WAS selling well, and when I broached the subject of continuing The Mediator series with HarperCollins my Princess Diaries publisher, they agreed to not only publish two new books in the series, but purchase the previous books in the series and reprint them. I'm eternally grateful to HarperCollins for breathing new life into The Mediator series, and allowing me to finish it up the way I'd planned to.

I have no plans on continuing The Mediator series past six books at this time. I'm happy with where I've left Suze and Jesse in TWILIGHT, and hope readers are as well. To continue the series would mean to introduce further conflict into Suze's world, and I feel like she deserves a rest after everything she (and I) has been through with this series. I'm grateful to all the readers who've stuck by this series, and hope you'll look forward to the new paranormal series I'll be writing in the future!

(The above piece was taken from http://www.megcabot.com/mediator/about.php, and is written by Meg Cabot) 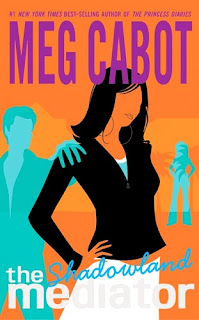 Suze is a mediator—a liaison between the living and the dead. In other words, she sees dead people. And they won't leave her alone until she helps them resolve their unfinished business with the living. But Jesse, the hot ghost haunting her bedroom, doesn't seem to need her help. Which is a relief, because Suze has just moved to sunny California and plans to start fresh, with trips to the mall instead of the cemetery, and surfing instead of spectral visitations.
But the very first day at her new school, Suze realizes it's not that easy. There's a ghost with revenge on her mind ... and Suze happens to be in the way. 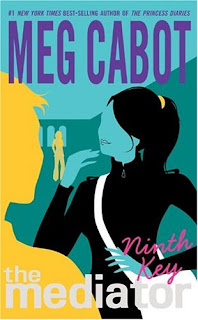 Everything is going great for Suze. Her new life in California is a whirlwind of parties and excellent hair days. Tad Beaumont, the hottest boy in town, has even asked Suze out on her very first date. Suze is so excited that she's willing to ignore her misgivings about Tad ... particularly the fact that he's not Jesse, whose ghostly status—not to mention apparent disinterest in her—make him unattainable.
What Suze can't ignore, however, is the ghost of a murdered woman whose death seems directly connected to dark secrets hidden in none other than Tad Beaumont's past. 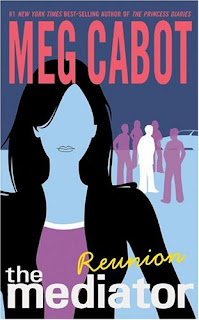 The RLS Angels are out for blood, and only Suze can stop them—since she's the only one who can see them. The four ghostly teenagers died in a terrible car accident, for which they blame Suze's classmate Michael ... and they'll stop at nothing until he's joined them in the realm of the dead.
As Suze desperately fends off each attempt on Michael's life, she finds she can relate to the Angels' fury. Because their deaths turn out not to have been accidental at all. And their killer is only too willing to strike again. [close] 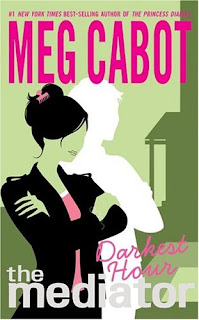 When the nineteenth-century ghost of Maria de Silva wakes her up in the middle of the night, Suze knows this is no ordinary visitation—and not just from the knife at her throat, either. In life, Maria was the fiancée of Jesse—the same Jesse who was murdered a hundred and fifty years before. The same Jesse Suze is in love with.
Maria threatens Suze: The backyard construction must cease. Suze has a pretty good idea what—or rather, who—Maria doesn't want found. But in solving Jesse's murder, will Suze end up losing him forever? [close] 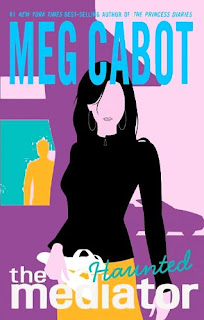 Suze is used to trouble, but this time she's in deep: Ghostly Jesse has her heart, but Paul Slater, a real flesh-and-blood guy, is warm for her form. And mediator Paul knows how to send Jesse to the Great Beyond. For good.
Paul claims he won't do anything to Jesse as long as Suze will go out with him. Fearing she'll lose Jesse forever, Suze agrees. But even if Suze can get Jesse to admit his true feelings for her, what kind of future can she have with a guy who's already dead? 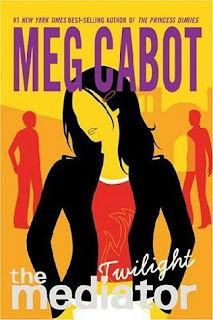 Suze has gotten used to ghosts. She's a mediator, after all, and communicating with the dead is all in a day's work. So she certainly never expected to fall in love with one: Jesse, a nineteenth- century hottie. But when she discovers that she has the power to determine who becomes a ghost in the first place, Suze begins to freak. It means she can alter the course of history ... and prevent Jesse's murder, keeping him from ever becoming a ghost—and from ever meeting Suze.
Will Jesse choose to live without her, or die to love her?

Twilight is the sixth and final book in the Mediator series.


You can read can read excerpts of the books on Meg Cabot's website that I will link below.


Oh! By the way, from what I can tell, this series was origianlly published under different titles, but the titles were changed, for one reason or another.

Just in case somebody comes across an older version, that way they won't be confused.


Anything more you think I should share? Any comments on the book or author? Please let me know in a comment, and I'll try and respond as quickly as possible (on the post, in a comment).


(A/N: All summarys used in this post were taken from http://www.goodreads.com/)
Posted by Hailey Miller at 11:12 AM

Hailey Miller
United States
My name is Hailey or Shadowofwonder47 and reading is my hobby!! Preferably YA books!!